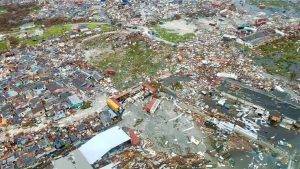 When the most powerful Atlantic storm in recorded history hit the Bahamas, the devastation was beyond belief.  Before the hurricane hit, a team from World Central Kitchen was already there getting ready for the critical job ahead, feeding thousands of hungry, thirsty and often newly homeless.  In short order the WCK team had scaled up to preparing 30,000 fresh meals per day  for delivery by boat, plane, helicopter or on foot to government centers, schools, hospitals clinics, churches and more. World Central Kitchen was founded by Chef Jose Andres to rush to assist when disasters like these strike.  The Executive Vice President of World Central Kitchen, Nate Mook explains the mission, vision and how World Central Kitchen works in this previously published encore edition of Farm To Table Talk.  www.wck.org 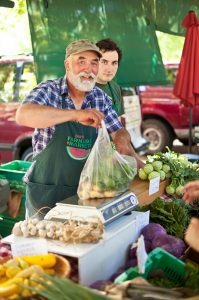 One of the earliest Farmers Markets in America, in Davis California, is also widely recognized as one of the best. The history of the Davis Farmers Market begins with the social awakening of the late 1960s and early 1970s, which set the stage for the establishment of alternative, local food systems. Since then, farmers’ markets, led by Davis, a college town in the Sacramento Valley, and by California, have exploded across the country. Today, there are more than 8,000farmers’ markets nationwide – more than 700 of them in California. The Davis market, in the city’s Central Park, takes up about a third of a 5-acre park on Saturday mornings and more on Wednesday evenings during Picnic in the Park. It operates under a pavilion built with public funds, and it draws 7,000 to 10,000 people each week. Randii MacNear has been the Executive Director of the market from the very beginning and deserves much credit for its success.  With some introductory music from Banjo Fiddle, RandiiMacNear joins our table talk about the visible heart beat of many communities, their Farmers Market. 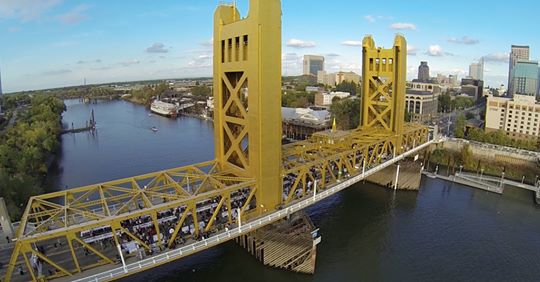 Over 100,000 food and farm fans attend the annual two day street Festival of America’s Farm to Fork Capitol, Sacramento.  The weekend event is culminated with a special dinner on the downtown Tower Bridge for over 800 lucky diners. The 2019 Tower Bridge Dinner will feature a star-studded cast of women who have made their mark on the culinary scene led by Suzette Gresham of San Francisco’s Acquerello, who has held a two-star rating from Michelin since 2015. Joining her will be Sacramento chefs Allyson Harvie of Ella Dining Room and Bar, Casey Shideler of Taylor’s Kitchen, Molly Hawks of Hawks Restaurant, and Tokiko Sawada of Binchoyaki.  Suzette Gresham became only the third American woman to be honored with two Michelin stars in 2015, and her work in San Francisco’s Acquerello has seen it land a spot in the San Francisco Chronicle’s Top 100 Bay Area Restaurant List for the past 22 years. Ingredients are one of the central pillars in her kitchen, and she seeks to provide diners with an experience. Additionally, she has long focused on providing a workplace free of fear and intimidation, regardless of gender, and focuses on passing on her knowledge to the next generation, including passing 63 interns through her kitchen. Suzette Gresham joins Farm to Table Talk that covers her Michelin two star selection, farm to fork and what she likes about the Sacramento Farm To Fork scene. 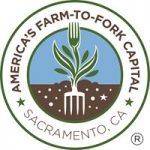 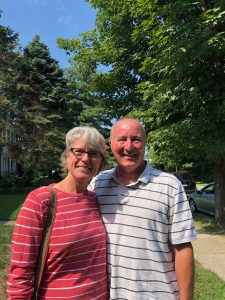 Inspiring stories of people making a difference in their communities with food, farming or gardening are showing up all over.  When the person you marry, shares that passion and commitment, it’s exceptional. Mimi Dyer and her husband Steve Gay are one of those exceptional couples. Mimi is Board President of La Soupe, a nonprofit organization that rescues produce that would be thrown away and creates nutritious and healthy meals for non-profit organizations, food insecure families and customers. She is a volunteer leader in charge of volunteers, outreach and administration. Steve Gay is an Urban Agriculture helper, Master Urban Farmer, master composter, community garden trainer and sustainable agriculturalist. Between the two of them is a bond to do all they can to contribute to reducing food insecurity and building more resilient community.  Today that mission is being realized in the Cincinnati area but wherever the future takes them they plan to role up their sleeves and go to work helping others in need of good food or opportunities to participate, contribute and grow. 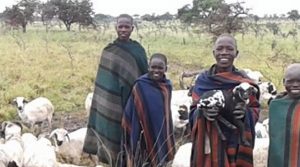 How will we feed the world in the future when we are doing such a poor job of it now? Many of us are fortunate enough to not worry that our own families will get enough to eat. And some are fortunate that they can do something to improve the prospects of feeding the world. One of those fortunate enough to make a difference is Dr. Gbola Adesogan, Director of the Feed The Future Innovation Lab at the University of Florida. Dr. Adesogan joins Farm To Table Talk and explains the current and future state of the world. Animal-source foods are commonly lacking in the diets of the poor and vulnerable in developing countries, particularly children and women who need them most. Due to their high content of quality protein and bio-available micronutrients, increased consumption of animal-source foods can improve the nutritional status as well as the growth, psychomotor functions, cognitive development, and health of children–especially infants under the age of two. Dr. Adesogan’s work focuses on sustainably improving livestock productivity and marketing and animal-source food consumption using appropriate improved technologies, capacity development, and policies, in order to improve the nutrition, health, incomes and livelihoods of vulnerable people while reducing the environmental impact of livestock systems “Regenerative agriculture” will change the conversation about livestock and climate change. Progress will improve household nutrition, food security, and incomes, in addition to the competitiveness of smallholder livestock systems—feeding the future. 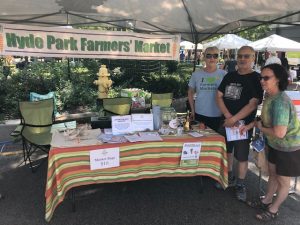 Farmers Markets could be the best thing to happen to Agriculture this century. Some will argue that point because they don’t see how conventional agriculture with large scale commodity production, supplying supermarkets and restaurant chains, benefits from the over 8,600 local farmers markets that have sprung up all over. The simple answer is that the markets have been the catalyst for the Farm to Table movement-triggering curiosity, understanding and respect in the ways our food is grown. Most everyone that shops at their local farmers market also shop at supermarkets and eat at restaurants where they are becoming accustomed to seeing information about the farms and farming systems that produced fresh, canned, jars and frozen foods. These conversations matter a great deal and are added incentive for food producers and farmers to share the story of how they are constantly improving. Additionally Farmers Markets foster a community spirit with direct interaction between the farm and the community. Don’t miss visiting a Farmers Market this week. It is the 20th Annual Farmers Market celebration. This year, the Farmers Market Coalition is highlighting the important role that farmers markets play in fostering entrepreneurship: providing a low-barrier to entry, maximum return on investment, and immediate feedback on new products for small businesses. The executive director of the Farmers Market Coalition Ben Feldman joins the Farm to Table Talk to celebrate the progress and the future of the markets we love. #LoveMyMarket www.farmersmarketcoalition.org 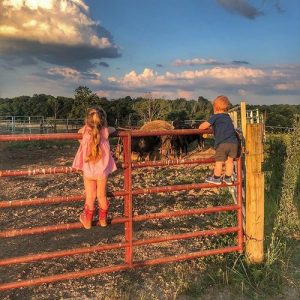 Can we grow up, get a good education, find a job, start a family and still raise livestock? More and more are doing just that. While attention is focused on how old the average farmer is, there is a movement a foot with more young people finding a way to supplement there post education careers with raising livestock on the side.  Sarah and Josh Ison are pursuing that journey from their home in the Ohio River Valley.  Separately they discovered that they loved animals from their beginnings with 4-H projects and years later after each achieved PhD’s from Texas Tech they returned to their home country where they are producing angus cattle for their CincyBeef enterprise–supplementing their scientific careers. Beyond their off farm work, there are cattle chores to do (with their kids) and weekends at Farmers Markets. Farm To Table Talk covers their journey, their hopes and their advice for other young families who share the dream of raising livestock on the side. www.cincybeef.com

No matter the size of the farm, access to information about whatever is being grown can make the difference between simply “sustaining” or thriving.  While technology at first favors giant enterprises, advances have put the answers from the “Cloud” literally in the hands of any one in the food chain, from seed to table. Martha Montoya is the Founder and CEO of AgTools Inc, a cloud-based data service providing information on over 500 fruits, vegetables, herbs, nuts and ornamentals. From their “Cloud” comes over 71 million records of global data from universities, government agencies, research institutes, industry associations, weather services and other sources to farmers and their customers. How empowering information is accumulated and what/where is “the cloud” is the point in this Farm To Table Talk conversation.

“There is no box outside of which to think.” This is a motto of the founder of Fresher Sacramento, Rabbi David Azen and perhaps his response to the admonition to Abraham in Genesis to be a blessing to all the families of the Earth. Rabbi David Azen gets that point and is starting in Sacramento where he has founded and serves as CEO of Fresh Sacramento, a CA based non-profit which has launched the Fresher initiative to bring healthier prepared meals and fresh produce to underserved neighborhoods. Fresher Sacramento combines fresher foods sales, nutrition and cooking classes, job training and asset building in one comprehensive model. Rabbi Azen has had a varied career, serving congregations of various sizes while also working outside of synagogues as a writer, actor and producer.  He has been building Fresher as a replicable model for empowering youth as agents of constructive change – training over 500 youth to become nutrition educators and advocates, and enabling them to develop workforce skills, entrepreneurship and financial literacy–distributing hundreds of thousands of servings of fresh fruits and vegetables in underserved neighborhoods, as well as putting in garden beds and establishing a gardening curriculum at the Sacramento County Youth Detention Facility. 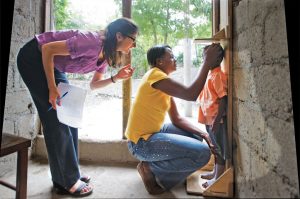 Human evolution has had its diet du jour for thousands of years. Through the ages one would expect that life expectancy, brain size and height would have improved with the advent of agriculture, 10,000 years ago. That assumption would be wrong. In fact for various reasons, at the advent of agriculture, life expectancy declined from 40 years to 20 years and there is evidence that height and brain size also declined. The E3 Nutrition Lab at Washington University in St. Louis sizes up humans’s dietary progress from three related perspectives: evolutionarily appropriate, environmentally sustainable and economically affordable. Lora Ianotti is the Diretor of E3 Nutrition Lab and Associate Dean for Public Health at Washington University. She takes Farm to Table Talk back millions of year and then forward again to consider the issues of today and tomorrow’s diets. https://e3nutritionlab.wustl.edu