Some of the most productive farmland in the world has been knocked out of production by an historic drought. And in California alone over a million citizens lack access to clean drinking water and according to the California Dry Well Reporting System, communities have reported that 966 wells have gone dry this year. If this isn’t a crisis what is? When we look for solutions we may need to look for clues on our plates. Tomatoes are over 95% water, much of which can be removed before the production of ketchup, sauce, soups, salsa and the other products that are how most tomatoes are consumed. . Greg Pruett, President of Ingomar Packing and Terry Paule,Co-founder and CEO of Botanical Water (BWT) explain that their new venture is producing potable water (safe to drink) from tomatoes during the tomato harvesting season. The technology has been proven in applications in Australia over the last few years, but the BWT partnership with Ingomar marks the first offering in the United States. Plans are to expand to other Californian regions, other States in the US, Mexico, and India, to provide water harvested from plant-based processors, such as sugar mills, fruit and vegetable concentrators, to scarce and high risk regions.   There are over 10,000 food processor sites globally with a combined ability to harvest 264 billion gallons of water per year. Every drop is needed. www.wegrowwater.com www.ingomarpacking.com 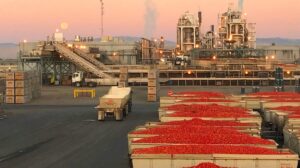